About The Artist With hits like “Alice’s Restaurant” and “Coming into Los Angeles,” the oldest son of folk pioneer Woody Guthrie performed at the original Woodstock Festival and became an icon of the 1960s counterculture generation. 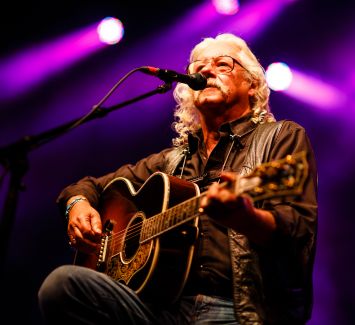 Guthrie’s live performances are as much about what he says between the songs as they are about the songs themselves.

Arlo simply casts a bemused eye on what is going on around him and uses the old songs and his wry, hilarious song introductions to comment on it all. It helps, too, that he is the best interpreter of his father’s songs, and to hear Arlo Guthrie sing a Woody Guthrie song is to hear it wonderfully close to its original source.

Guthrie delivers the kind of set he did 40 years ago, only with the song introductions lovingly adjusted for time and distance, and everyone is blessed to have him still doing it, a sort of steady and trusted barometer of the times.