About The Artist “There’s a certain romance that surrounds the Mavericks. Maybe it’s their Latin-tinged party sound. Maybe it’s Raul Malo’s enveloping tenor. Or maybe it’s just because somewhere right now, babies are no doubt being made to their music. Whatever the reason, the Miami-born, Nashville-based group is arguably the Last Great Romantic Band.” – Rolling Stone 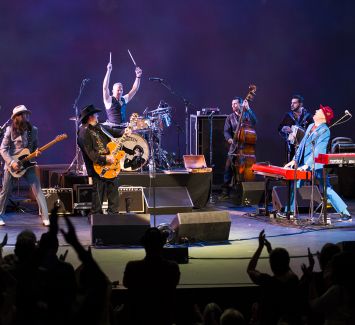 Although they first broke into the limelight marketed as a country act in the 1990s, Miami’s Mavericks, led by the soaring, Roy Orbison-like vocals of singer Raul Malo, and with a sound that blends country elements with Tex-Mex, Latin, and Cuban touches, along with pure pop, making them closer to a band like Los Lobos than a country band.
More than two decades into a career, The Mavericks turn another corner with the new album Brand New Day, to be released on March 31.