About The Artist “Cult folk-rockers who can still carry off their sweet, supple harmonies and bouncy acoustic pop with aplomb.” -Billboard 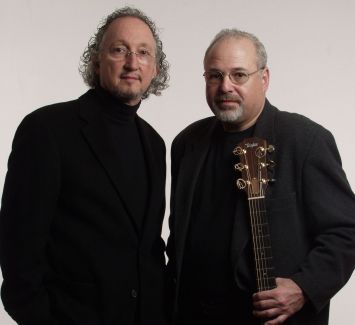 Meeting serendipitously at a Boston open mic in 1971, folk-rock duo Aztec Two-Step, whose name comes from a poem by beat poet Lawrence Ferlinghetti, burst upon the scene in 1972 with their self-titled debut album on Elektra Records. Their first album, along with their subsequent albums for RCA Records were staples of progressive FM and college radio and helped to bring the music of the 1960s into the 70s and beyond. Since then Rex Fowler and Neal Shulman have spent a lifetime making music together, and after 45 years of non-stop touring, they continue to impress audiences with intelligent songwriting, dazzling acoustic lead guitar, and inspiring harmonies. They remain one of acoustic music’s most respected and enduring acts.
“In the midst of pure-as-silk harmonies and tight pop-rock-folk arrangements, Fowler’s songs are biting commentaries of contemporary society.” – Boston Globe